A few days ago I noticed that my website was getting a little sluggish. It wasn’t much but it wasn’t as snappy as usual. I checked out the website dashboard on Azure and noticed that the number of requests to my server were steadily rising. A quick scan of the logs revealed that a single IP was flooding my server with requests. It was trying to hit the URL where I used to serve up CascadeSkier data so I doubt it was an intentional DOS attack, but the effect was ramping up to be similar.

I wrote previously about blocking traffic to Azure websites, but new features are always getting added so I looked around again. Indeed they have added the ability to block specific IPs. Check out the final section of ScottGu’s blog post for more info.

It was a one line configuration file change and the results were immediately apparent. Even if you don’t understand any of the geek gibberish that I just wrote, I bet you can figure out when I implemented the change: 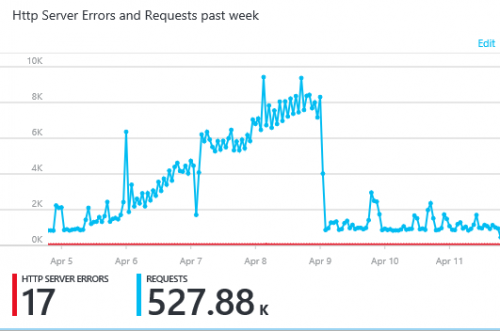