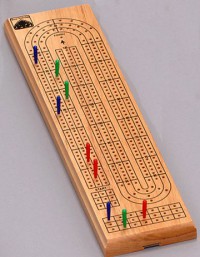 Cribbage and euchre are two evening staples when I go back to the Midwest to visit family. At Christmas we generally had three people playing games so cribbage was the choice. We kept coming up with questions about the game that we looked up on our phones while we played. Here are some of the things we found…

Why is it called “nobs”?
If you hold the Jack of the suit that got turned up on the pile, you get 1 point for “nobs.” The short answer is that nobody really knows why it’s called that. Some ideas are that nob is British slang for an important person or for a person who thinks they are important. You can read more than you probably care to on this page.

What is the average score in your hand?
Mathematically, it’s 4.55, but in reality, it’s higher because you strategically discard. The dealer generally scores a little less than the other player(s) because the dealer may defer some points ot the crib. For a 2 player game, mean for the non-dealer is 7.8580 (std dev 3.7996) and the mean for the dealer is 7.7981 (std dev 3.9082). For 5-card play the mean for both players is about 5.4.