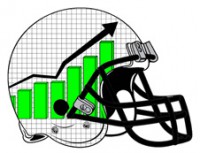 I wrote a tool for our fantasy football league that checks the rosters twice a week and sends out emails if you having anyone starting a game who is injured, on a bye week, or just questionable. That, along with lots of effort from each coach, has made our league pretty good in terms of starting full rosters every week.

First of all, I have some corrections to make to the table of records. One of these is due to a stat correction from Yahoo and the other is because Yahoo’s online interface didn’t let me go back far enough to see the old record. Here is the updated table with changes in bold. It turns out that Tim didn’t break the record for highest score in a game or the highest player score in a game.

Ok, but that’s pretty boring. What else can we answer? How about who had the most points on their bench? Instead of just counting the total, let’s look at the percentage of the total team’s points that sat on the bench. This stat is mostly just a curiosity. You could have a lot of points on the bench because you started the wrong people or because your team was really strong.

Which positions produce the most average points in a game?

I broke the all time record for most points in a season. But how does it compare to everyone else over the past seasons? 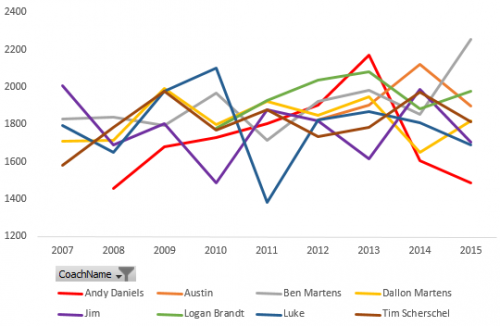 How does the average number of points per team vary by year? Does it all average out or is there more scoring in some years?

Which players have generated the most points since 2007 in our league?

Who were the top 3 players at each position in our league this year?

Who has had the easiest schedule for the history of our league?
Tim. Dad has had the hardest schedule. But really, they are all very similar. Nobody deviated more than 2% from the mean.

Who had the most close wins in the last four years? This is a count of the number of times that each person won by less than 10 points.

There are so many more questions on my list to answer, but frankly I’ve been spending a lot of late nights digging through this. Hopefully if I get this post out, I’ll stop for a while and go to sleep!

If you’re interested in this dataset, let me know. I can either ship it to you in Excel or I can give you access to the SQL database and you can run your own queries. I hope to keep it running next year as the season progresses. I think I’ll also be able to use it to generate the Weekly Awards table each week which will make my blog posts easier.

Thanks to everyone for a great season! Go Seahawks!