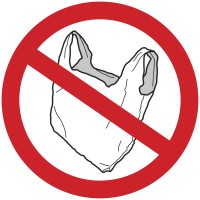 As of March 1, you won’t be receiving plastic bags at checkout in Kirkland anymore. We live in Woodinville, but we’re right on the border with Kirkland and the Safeway we use most often is in Kirkland. Seattle and Issaquah made this change a while back but I guess I missed the fact that Kirkland was going to do this because it caught me by surprise. Now you either need to bring your own bags or pay $0.05 for a paper bag.

The council passed this last year and at that time, there were some surveys showing that over 60% of people were against this idea. I wasn’t included in that survey, but I agree. I’ve been doing a lot of whining this week about government actions, but this one frustrates me too.

The argument is that plastic bags are bad for landfills. I’m not going to disagree with that, but I disagree that this new law is the logical best course. Why couldn’t we ask/force stores to have a bin for recycling plastic bags? If you want to ban plastic bags, why are you making it a law that stores HAVE to charge $0.05 for a paper bag? Paper bags used to be free but now they cost money? Shouldn’t we be encouraging people to use paper because they are easier to recycle or even reuse without recycling.

I’ll just pay the nickel fee per bag, but I’m tempted to buy a stack of plastic bags and bring them with me. Techncally I think that complies with the law.

The good news is that these local laws are easier to complain about than state or federal laws. It’s probably too late to make any changes to this current situation, but I with such a small voting base, it’s not a stretch to remove these people from office in the next election. Councilmember Councilmember Toby Nixon was lone dissenting vote.