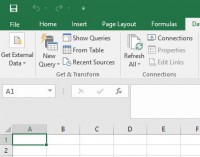 The next version of Office is now public. “But Ben, I already have Office and I hate buying new copies of it.” Never fear! Do you have an Office 365 subscription? If so then you get this upgrade for FREE. And if you don’t have a subscription, this is a good reason to consider it. Unless you have a single computer in your house and you never upgrade Office, the subscription is a great deal. You get five installs with free upgrades, 1TB on One Drive, and some other perks for  100/year. There’s no more worrying about whether or not the upgrade is worth it for you. Pretty slick!

I normally don’t get too worked up about Office upgrades, but I’m really excited about Excel 2016. You may remember that I spent the vast majority of my time at Microsoft on Power Query and the projects that led up to it. Power Query now ships as a core feature of Excel 2016! Click the Data tab and look in the “Get & Transform” section. It’s awesome to have my code running on hundreds of millions (or billions?) of desktops. I know that it’s not a feature that most people will use, but it’s still cool to be included.