If you’re running Windows 7 or Windows 8, you may be noticing a new notification down by your system clock. It gives you the option to update to Windows 10, reserve your copy, etc. What is that all about?

Windows 10 is going to be released on July 29. For the first year, it will be a free upgrade for existing Windows users and it sounds like this might be the “last version” of Windows 10. That probably means that they’re just going to keep updating Windows without having major version releases and it probably also means that the future updates will be free. I don’t know how firmly any of that is decided or announced though.

If you’re really interested, you can get it now. I’ve been running it on one of my extra machines at work and it’s just fine. However, even though they say they’re getting finished with the final production code, PLEASE remember that if you upgrade early, you’re potentially putting your sanity at risk. Personally, I won’t put pre-release software on any critical machine and for me that, that means my main home and work computers, my phone or anything that Tyla uses. The cons far outweigh the pros in my book, but you can decide for yourself. The odds are that it will work fine for you.

The Windows 10 update notification also gives you the option to “reserve” your copy of Windows 10. It appears that this just sets a flag to download Windows 10 in the background and then notify you once it’s ready later in July. I’ve done this on most of my machines and it’s probably a good idea unless you’re super paranoid. For example, I’m not doing this on our main file server. I’ll wait a month or two before upgrading that one.

The new features in Windows 10 are pretty nice. You can easily find articles about them on the web, but here are a few:

To sum it up, everyone should update to Windows 10 but you can wait until later this summer to do it. Just make sure you do it before next summer or else you might have to pay for the privilege. 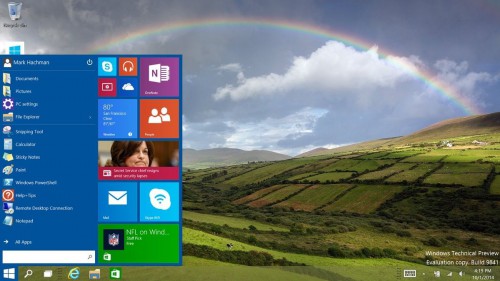