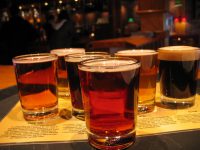 Congrats to Luke who has won the race to be the first one in our group with 500 unique beers logged in the Untappd app! His 500th beer was a Castor from 3rd Sign Brewery and he only a 3 out of 5 stars.

I’ve already done a post with some stats about our beer drinking, but here’s another one. It’s the average score that we give to beers. You can see that I’m a little more stodgy than the others, or maybe I’m just more willing to try beers I know I won’t like just so I can log them in the app. (I’ve included Logan this time since he has started using the app too.)

How about which breweries we like the most? For this I only considered breweries that 2 out of the 4 of us have tried. Here the top 10:

I was going to have a chart showing the type of beers we drink the most, but we all had pale ales at the top of our lists.