Dad, Luke and I all use the Untappd app pretty regularly. Think of it like Facebook for beer. You “checkin” when you have a beer and you give it a rating. You can see what your friends are drinking, get recommendations, etc. I love it because it’s an easy way to keep track of all the different beers that I’ve tried and how much I like each one. It’s a great encouragement to keep trying new things.

I recently tied into their API and wrote a quick app that lets me download the data locally for analysis. There are lots of questions that I want to answer, but here are a couple fun charts to get started.

The first is a chart showing how many checkins we’ve each had by IBUs (International Bitterness Unit). It doesn’t show how much we LIKE them, but it does show which ones we generally try.I’d love to expand this to show how this has changed over time. 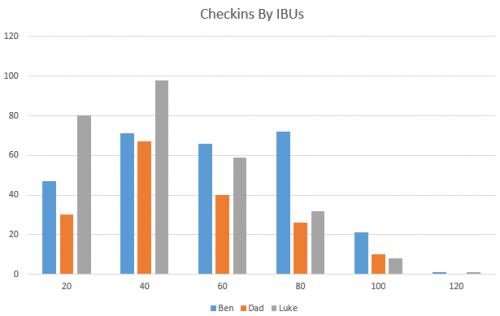 Here is one showing the cumulative number of checkins we’ve had over time. This chart is a little sloppy because each user series should have it’s own color, but there are only three of us so it’s not too hard to follow. If you look at the end of the chart, Luke is the top line, I’m the middle and Dad is the bottom. You might think that after a while, you run out of new beers, but if that’s true, we haven’t hit that point yet. We’re all on a pretty steady upward trajectory.

I took a look at which beers have the highest combined score from the three of us. The beers with wider distribution are more likely to win because to get to the top it helps if we’ve all tried it. Since I’m out on the west cost and they are in the midwest, most of the time our beers don’t overlap unless they are bigger breweries. Here are the top six in order.

Looking at the bottom of that list is a little silly because there are only 40 beers that all three of us have tried. I expanded it out to beers that at least two of us have had. There are 129 in that list and here are the bottom three. I bet you won’t be surprised.

I’m looking forward to playing around a lot more with this data. If you want access too, just let me know.