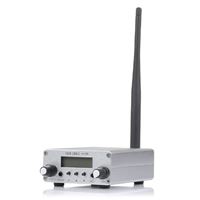 Back in 2005, I wrote a post about a radio station in Philly called Ben FM (95.7.) I joked that it was nice to have my own radio station and actually got a few gullible random Philly residents who wrote in with their comments on the station. Unfortunately those comments have been lost to time.

But now that joke is a bit closer to reality. If you come to my house and tune your radio to 91.9, you’ll here my very own radio station. Why? Well Tyla and I generally listen to country and the two country stations around here are terrible. 94.1 plays the same dozen songs over and over again and 100.7 has one of those stereotypical overdone morning show radio guys who is painful to listen to. Nevermind that if you have the radio on while taking a shower, you are lucky to hear two songs in the whole 10-15 minutes you’re in the bathroom.

I’m too cheap to cover the house in Sonos equipment, so instead I purchased 0.5 watt FM transmitter from Amazon. I hooked it up to the server in our house which is always on anyway. The server is currently playing music from a Christmas playlist that I put together on Xbox Music, but in the future I could see paying for a Pandora subscription and letting that run.

So far it’s working out really well. Every radio in our house easily gets a clean signal and now we have a station playing exactly the music we like with no commercials.