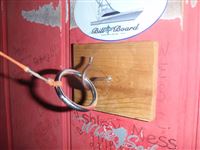 When Jay came through town, he said we needed to go to Home Depot to buy some hardware to make a game he’d just learned called bimini ring. The basic idea is that you have a ring connected to a string. You swing it forward and attempt to get it to hook onto a hook sticking out of the wall. Simple, but complicated!

The game started in England hundreds of years ago and over there it’s called “Ringing the Bull” because they used a bull nose ring. When the English settled the Caribbean, they brought that game with them and it really caught on. Bimini is a town in the Bahamas and I guess that’s where it got it’s new name.

It’s not a wildly exciting game, but as with most games like this, it’s a fun way to pass time with friends. Once you get the hang of it, you can get it to stick on the hook fairly regularly. The official scoring rules require a ringer to get any points, but an easier way to play includes giving points if you just touch the hook on the wall with the ring. And since this game is from the Caribbean, I’ve added my own suggested rule of playing with rum in your hand. You can check online to find the measurements for setting up your own game.

This game is super cheap and can be played just about anywhere. I think we’ll be adding it to our regular set of games which also includes bocce ball, Kan Jam, hillbilly horseshoes, and of course, corn hole.