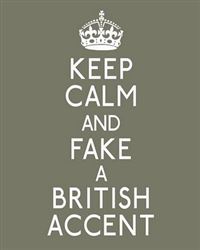 If you watch a movie set in England before the mid-1700s and the actors are speaking with a British accent, feel free to annoy your fellow movie watchers and point out that the accents are not historically accurate. What we think of today as a British accent didn’t exist back then. They spoke pretty much like we do in America now. The British accent was created by rich people in England who wanted to distinguish themselves from commoners. And since Boston and New York City in America had similar deposits of rich people with connections to England, they picked up some of the accent too (dropping the R’s.) I’m not sure who sits around at a party and decides to stop saying a letter to sound more cool, but hey, stranger things have happened!

Thanks to KenC for posting the article in Live Science about this.