It all started at the church Christmas party in December. Logan was talking to DaveK about his incredible weight loss and he mentioned that getting up to Camp Muir was his “man mission.” Dave said, “Great! Let’s do it!” That’s the point where I walked up and said, “I’m in. What are we doing?” “Camp Muir!”

Fast forward to August and I was waking up at 4am to meet Logan, Dave, TimK, and Pastor for the drive down to Paradise. We arrived in the parking lot at 7:45 and we were on the trail by 8:15. 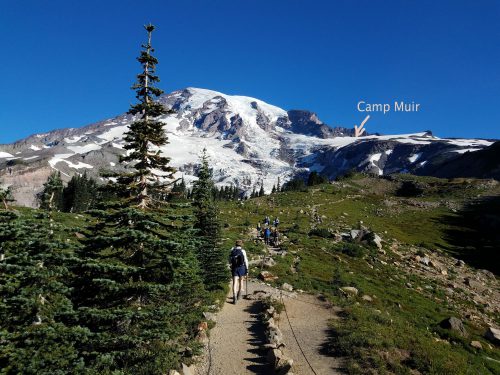 Skyline Trail up to Pebble Creek is one of the most popular hikes from Paradise. It’s about 1800 feet of elevation gain (from 5400 feet at Paradise up to 7200 feet) in around 2 miles. We maybe stopped once but we were up to Pebble Creek very quickly. We took a break there to refuel, change our clothing a bit and get ready for the snowfield. 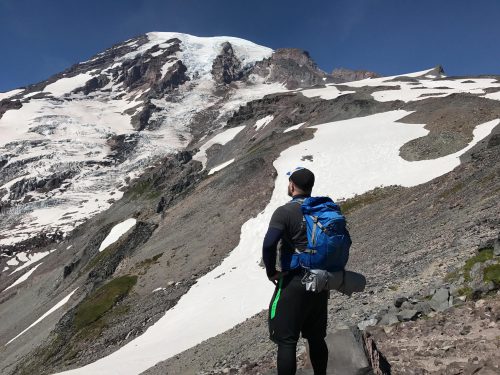 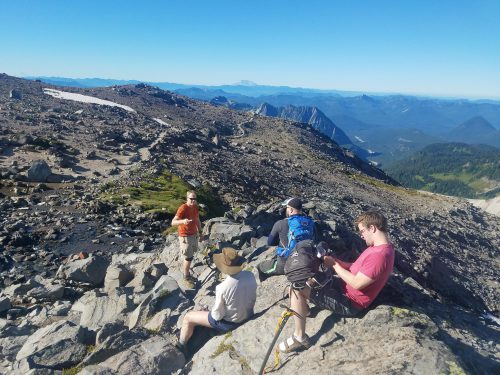 From Pebble Creek, the route goes straight up the Muir Snowfield. It’s about 2.2 miles and 2800 feet up to Camp Muir from Pebble Creek. And it’s on snow. And the snow is slushy from the sun. And oh yeah, you’re going up over 10,000 feet so you rapidly start to notice the decreased lack of oxygen.

At this point we spread out a bit, set our own paces and got in the zone. It’s hours of staring at your feet, concentrating on your breathing, and taking tiny little steps up the mountain. I don’t know what the “hardest day hike” in the area is, but this has to be a solid contender. In addition to the physical challenge, the immense scale is psychologically frustrating. You put your head down, slog away for 20 minutes, look up and realize that your goal doesn’t look any closer than it did before. 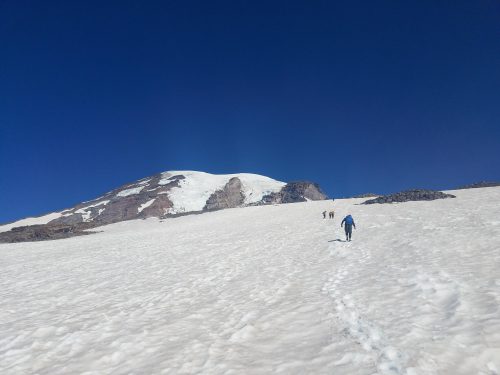 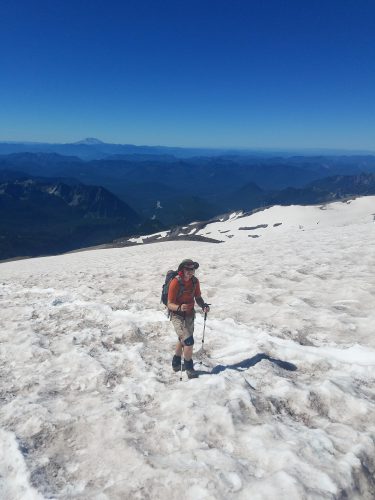 But we all made it! Logan was first up with a total time (from Paradise) of 3:26. He probably could have shaved off another 10 or 15 minutes but he stopped to wait for us at one point on the snowfield. Pastor and I clocked in right at 3:30 and Dave and Tim came in at the 3:45 mark. My previous time was 4:10 so I was very happy to beat that. 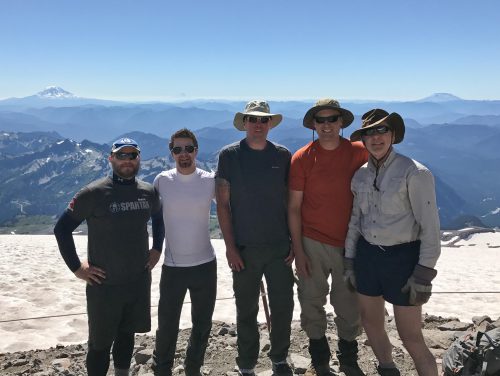 We hung around at the camp for about an hour enjoying the incredibly clear views. Mt. Adams, Mt. Hood, and Mt. St. Helens were clearly visible. The temps were perfect and there wasn’t a lot of wind. I couldn’t have dreamed up better weather. 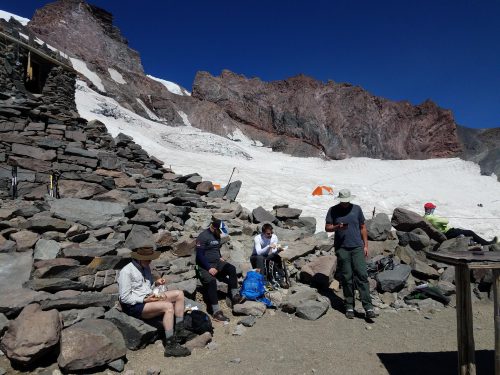 Eventually we made our way back down the mountain. We all brought something to slide on. Most of us brought trash bags but Dave had snowpants (the smart choice) and Pastor had a tarp. Glissading down was fun for a while, but it was pretty painful. The chutes were all too narrow and the icy sidewalls would hammer our thighs. We got pretty soaked in the process too. But it sure beat the effort it took to go UP! The video below is not representative of most of the glissading. This one was right near the bottom so it was well-used and dug out by people who just came up to see the snow.

After another stop at Pebble Creek to switch into some drier clothes, we hoofed it down to Paradise dodging the enormous hordes of people who had made it to Paradise and were exploring the trails. 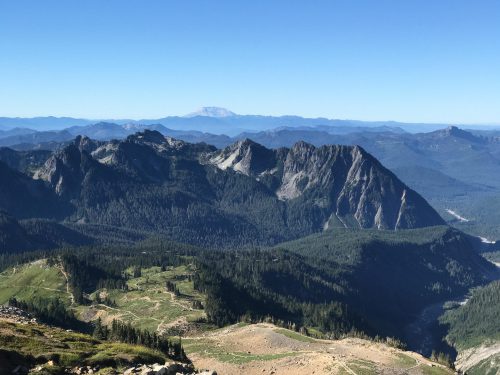 I’m really happy with how good my muscles felt after the hike. I had very little soreness aside from the bruising caused by the glissading. The worst part was that I think I got some altitude sickness this time. Thankfully it didn’t hit me until we were resting up at Muir. I had a bad headache and started feeling nauseated and lightheaded. The latter two went away as we descended bu the headache stuck with me well into the night.

In my blog post on the last hike, I had some good notes that were helpful for planning this trip, so here are a few more notes in case I do it again:

Thanks to Logan for suggesting this and to all the guys for banding together to make this a reality. It was awesome to see Logan beating us all up the mountain. Two years ago I don’t think anybody would have believed he could get in such good shape in such a short amount of time. Kudos to you Logan!