Ever since we started getting word about Windows 8, I’ve been getting asked if I’m going to write a new version of the CascadeSkier application. Up until now, only Windows Phone users have been able to enjoy it, but I expect the Windows 8 market reach will be a lot greater. Today I’m happy to announce that CascadeSkier for Windows 8 is available in the store!

Jeremy, the graphic designer who gave the phone app a huge facelift, is back on board for the Windows 8 version. He’s done a great job making this app look amazing!

If you’ve used the phone app before, you’ll notice that this new version is very basic. For example, there aren’t any live tiles yet or the ability to filter and sort the resorts. That’s all coming, but we wanted to nail the basics and get it into the store. There was a lot to learn with this first foray into Windows 8 development.

You can buy it in the store right now for $1.49 (the lowest price they let you choose, other than free) and there is a free 1 day trial. We’re planning to bump up the price once we get more of the features implemented so if you think you’re interested, grab it now! I’d also really appreciate if you could leave feedback for the app. As with most online stores, the average rating and number of reviews is a huge factor in the success of a product. Be honest, but if you have really negative stuff, it would obviously be better for me if you approached me directly!

We hope you have as much fun using it as we did creating it. Bring on the snow!

For more information on the CascadeSkier family of apps, head over to cascadeskier.com. 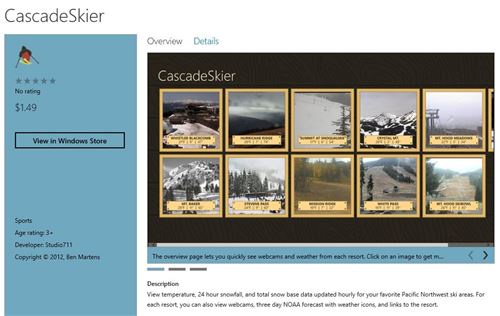