After my abysmal physical performance on Friday, I was pretty down on myself so I decided I need to get back on the trail and prove I wasn't a tub of lard. After church on Sunday, I drove to exit 34 and found Twin Falls State Park. The trail is not very strenuous (2.2 miles each way with 1300 cumulative elevation gain) so I set a quick pace and didn't take any rest stops. That was the plan anyway, but I did end up stopping at two points along the trail to view the amazing waterfall. It's not as big as Snoqualmie, but the hike up there makes it much much less crowded. If you click the image on the right, you'll see a large stitched photo of the full falls. It's hard to get a perspective from a picture like this, but the falls are 135ft high and about 30ft wide.

Our book of trails says this is a 2-4 hour hike, but I pounded it out in 1 hour and 23 minutes, and according to the GPS, I was stopped for 11 minutes of that time. As I came back across the bridge over the falls which is 1.2 miles from the trailhead, I crossed paths with the two groups that had left the trailhead at the same time as me. In the time it took them to go 1.2 miles, I had gone 2.2 miles up to the top and then 1 mile back down to that bridge. That brought a smile to my face.

The top of the trail connects with the Iron Horse Trail. That's the old railroad grade that goes all the way up to Snoqualmie Pass and includes a 2.2 mile long tunnel under the ski area. Tim and I have plans to ride our bikes down that one of these days so it was nice to see what the trail actually looked like.

This was the first time that I have ever hiked by myself. It was a great way to recharge my batteries, clear out a head that has been consumed with a lot of thoughts lately, and get in a good workout. After getting home, I proceeded to spend the rest of the afternoon on the couch watching NASCAR, but somehow I didn't feel too lazy which made it even better.

More pictures are available in the photo gallery under Outdoors > Twin Falls.

After I skied on Saturday morning, I met Rachel and Tim at Rattlesnake Lake for hike #10 from our hike book. As you can see from the GPS track below, we walked down to the lake since we had never been there before. The lake looks a bit low and the map seems to confirm that as it shows we were supposedly walking in the water.

From that point, the trail gets more difficult and there were only a few hikers. We had plans of going all the way to the top, but after we realized there was snow on the last mile, we decided to turn around. Our footwear wasn't ready for that much snow and we would have ended up with cold, soaked feet.

The hike was fantastic and has jumped up near the top of my list. If you go on the same hike, bypass the first ledge and go up another 0.5-0.75 miles to find another smaller ledge that will be much less crowded and offer even better views.

Saturday was good practice for my Camp Muir hike which is coming up on June 6. Mike and I have scheduled vacation for that day, and I rented randonnee ski gear. Hopefully the weather is as beautiful as it was today!

Rachel and I hopped on the motorcycle on Sunday and went exploring. The first interesting site was the split in the road pictured below. You can click on it for the full view. The road splits and both directions have a Dead End sign. I feel like this is a good cover for a motivational book, or maybe there's a sermon topic in there for you Pastor Scherschel.

All of our exploration ended in either dead ends or dirt roads. (Jay, if we had your Jeep out here, we could drive on dirt roads to some incredible places.) We backtracked back down to the main road and headed for Snoqualmie Falls.

I've been to the falls a number of times, but it's still one of my favorite places to show people. It's my way of saying, "See how awesome Washington is? This place is 14 minutes from my house!"

The near-record snowfall in the mountains coupled with the record warm temperatures has created a very fast melting snowpack that is sending flash floods down the hillsides. I was shocked at how much water was flowing over the falls. I've never seen anything close to it. Check out these comparison shots. I think it will be easy to tell which ones were from the weekend and which were from a previous summer. 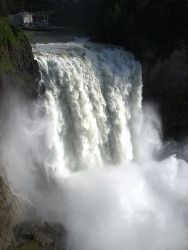 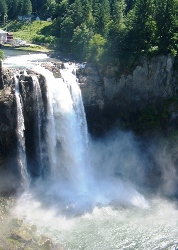 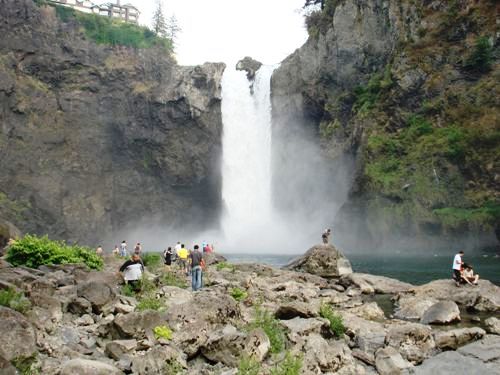 I don't have a comparison shot for this last picture because the river is so high that all of these rocks are underwater. The normally calm river where people go tubing has turned into raging rapids.

Speaking of record snowfall, Alpental is staying open for another weekend. What an incredible ski season!