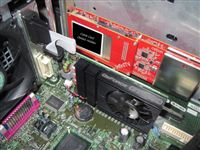 I’ve always been intrigued by the beauty of Windows Media Center. It comes with virtually every SKU of Windows now, but how can I get my cable TV hooked up to it? There have been various methods for the past few years, but nothing was good enough for me to take the plunge of killing the Tivo and switching to Media Center. I’m planning a couple posts about this project, but the first one will be on the hardware side of things.

The magic card that makes this all possible is the Ceton InfiniTV 4. It’s a PCIe card that accepts a cable card and records 4 HD streams simultaneously. One PCIe slot, one cable card, four TV streams. The cards came out towards the beginning of the summer and I watched as people worked through some of the early bugs. Ceton had trouble manufacturing enough cards to meet the demand. That meant that once I decided to take the plunge (8/31), I had to wait over two months for my card to arrive.

The next question was what hardware I needed around the Ceton. I had a four year old Core 2 Duo E6600 (2.4GHz) with 4GB of RAM. I didn’t really see how that could handle that much HD video processing, but I decided to start there and see what happened. The only upgrade I needed immediately was a new video card with HDMI out. The HDMI out would give me HDCP and multi channel audio.

I picked up the PowerColor Radeon HD 4350 512MB 64-bit DDR2 PCI HDCP Ready Video Card.  I thought I only had one PCIe slot which would be used for the Ceton card so this was one of the few PCI options. What a train wreck this ended up being. The PC would blue screen when I tried to install the drivers, and even when they were installed, I couldn’t play back live or recorded TV. After blowing an entire weekend trying to debug the thing, I shipped it back and headed to Fry’s to get something from the NVidia camp. I ended up with the Evga GeForce GT 430 1 GB DDR3 PCI-Ex card. Note that it’s a PCIe card. Stupid me, I had missed a PCIe slot because it was hidden behind/underneath some other junk in the PC. Once I removed it all, I had a clean shot to two PCIe slots which gave me a lot more options for the video card. The GT430 was super simple to install. Everything worked right away, and while it’s not passively cooled, it’s very quiet and the fan rarely runs.

The machine is an old Dell and the only fan is a VERY large fan at the front of the machine directing air over the CPU cooler. It runs very quietly but I was concerned about whether the video card and Ceton card would generate too much heat. I added an 80mm to the back of the case to pull air out, but it’s a bit noisy and I’m doing some testing to see if it’s really necessary.

The Ceton card was pleasantly simple to install. I called Comcast with a bit of dread, but that was very smooth. They asked directly if I was installing it into a Media Center or Tivo (an option I’ve never heard before) and then transferred me over to their Media Center guy. In theory there shouldn’t be any difference so maybe he’s also the Tivo guy. Either way, he was the most informed cable card guy I’ve talked to at Comcast. When it didn’t work the first time, I was able to give him precise feedback through the excellent Ceton diagnostic tool and he was able to debug/retry on his end. In about 15 minutes we had everything working beautifully.

The machine isn’t terribly loud, but the OS drive is the noisiest part. Since this is going to sit in the living room, noise matters. I ordered an Intel X25V 40 GB Solid State Drive to serve as the OS drive. It’s a bit slower than their top of the line SSD but it’s still faster than a platter drive and it will be perfectly silent. Plus, it’s just the OS so it’s not going to have a lot of writes other than the page file.

The last piece of the puzzle was hooking this thing up to my Harmony One remote. It’s the cornerstone of my whole setup so it needed to work with this PC. There are some “Media Center compatible” remote/IR receiver combos available, but you have to be careful because they don’t all support the RC6 Media Center standard. I ended up getting one of the original IR receivers that came with the Dell Media Center machines back in the day. I found it on eBay (first time I’ve used that site in YEARS) but it worked very well. I programmed the Harmony remote to think it was talking to one of the Linksys extenders. It works like a champ. When we drop out of the Media Center interface, I’ll use a regular wireless mouse and keyboard.

For now the machine is sitting in the computer room and we watch it via the Xbox360 in the living room. I’ve been running it through it’s paces and once I’m convinced that it performs well, I’ll swap out the Tivo. The only bug I’ve found so far is that when I record NFL football games on the local Fox affiliate, it will cut out every once in a while with a copy flag error. There’s a beta firmware available from Ceton that fixes this. I had a very good experience with Ceton support and was added to the beta. Hopefully this fixes my issues without adding too many other ones. Once I ditch the Tivo completely, I’ll be much less likely to get on betas or apply any other updates/patches to the machine. Windows Update is even turned off. I’ll do that myself at specific times after I’ve made a backup to my Windows Home Server.

As for whether or not the older machine could handle it, I have been very pleasantly surprised. Even at full load (recording 4 HD streams, playing back one locally and streaming another to the Xbox360 extender), it uses less than 40% of the CPU and there is plenty of memory overhead. Almost everything is happening at the hardware layer. Note that all of the video is on a single hard drive. The bandwidth required for four HD streams doesn’t come close to the overall throughput of the drive, but there are a lot of seeks going on. RAID seems like overkill at this point but it’s still on my radar if I hit little glitches. I’d definitely recommend putting the OS on a separate drive though.

That’s about it for the hardware side of the setup. Once I get a little farther along in the process, I’ll put together a post about what I can do with this that I couldn’t do before. The scenarios are pretty impressive if I can piece them all together well.