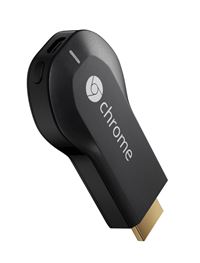 When we ditched a bunch of our cable stations, I picked up a Chromecast to help simplify streaming. For those of you that haven’t heard of it, it’s a little device a little bigger than a USB stick. It plugs directly into an HDMI port on your TV. You then install a plugin for the Chrome browser (or on your Android phone) and you can use your laptop or phone as a remote control to choose videos on YouTube, Netflix, and some other streaming sites. The reason it made such a splash is that after you pick your video, you don’t have to stay on that page with your laptop. You can keep browsing around while the Chromecast streams the video. And oh, yeah, it’s only $30.

We don’t have Android phones so that immediately decreases some of its value for us, but I did install the plugin for Chrome. I think I can easily say that if you want to watch YouTube on your TV, there is no better way to do it than with a Chromecast. The other apps work equally well.

The only place where it falls down is if you want to display an entire Chrome browser tab on your TV. That is acceptable for text browsing, but if you’re streaming a flash video, it’s unwatchable on the TV.

After I played with it for a while, the device went back in the box for future use. Our TV doesn’t have any spare HDMI ports in the back so it would have to stick out the side. I don’t need it often enough to have it sticking out like that.