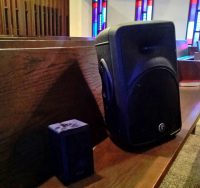 I’m the resident Audio Visual nerd at church. Over the years, I’ve slowly been cleaning up and improving the system, but the biggest problem was still the amplifier and speakers. The amp came out of my living room and could barely produce enough power to make the system audible on a busy Sunday. The speakers were tiny and some of them were blown out. (You can see an example of the old speaker on the left side of the photo.) Everything was cranked up as loud as I could get it without feedback or distortion and it was barely enough.

Finally, it was time to upgrade. The only catch was that I had no idea how big of a system we really needed. I didn’t even know how to find speakers that would work with an amplifier. I spent some time learning about resistance, RMS, amplifier wattage, and how to pair an amp with speakers and made a wild guess.

We ended up with a QSC GX3 300 watt amplifier and two Mackie C200 speakers. The speakers are rated for 200 watts RMS and the amp can drive 300 with one of these speakers on each channel. The speakers are mounted to the wall with some simple, custom speaker boxes that I made with plywood, pocket hole screws and black paint.

Our church is roughly 75 feet long, 40 feet wide and 30 feet high at the peak. My hope was to get a system that would be at about 30% total power to get the right volume under normal conditions. I failed that, but the system is still a success. This setup is loud. When the church was empty, I got it turned up about 1/3 of the way and it felt like a rock concert. I seriously wonder if more power could blow out some windows.

So yeah, overkill. But you know what? It feels AWESOME to have a system that really works and isn’t straining to sort of meet our needs. We have had a lot of births in the last five years so church is a lot noisier than it used to be and it’s nice to have the ability to drown out the kiddie buzz if we need to.