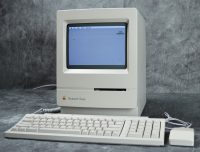 One of my earliest experiences with a computer was the Macintosh Classic (or Classic II?) that Dad would bring home from work. I spent a lot of hours on that machine and one of our favorite games was Airborne. Gameplay was pretty simple. You had two different times of guns to shoot from the lower left of the screen. Planes and helicopters flew in from the right and sometimes they would drop parachuting infantry. Once there were enough troops on the ground, you would lose.

It turns out that archive.org not only has some of the old Mac games, but there’s a built-in emulator so you can easily play them from your browser! Airborne is on the list and you can play it right now.

Now if only I could find a few other favorites from that computer. I remember an air traffic control game, a “3D” maze game with monsters, and an elevator/frogger game. I wasn’t able to find any of those on the archive.org list but maybe they’ll show up eventually.

One thought on “Classic Mac Games”