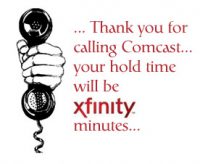 It has been a year since I got my last Comcast deal. That deal only lasted for 12 months. I noticed my bill went up again so it was time to call back. I spent 35 minutes on hold and had to hang up for a meeting. I called back again and spent another 30 minutes on hold. I started thinking that nobody was ever going to answer. That call was happening on my desk phone at work so I called in parallel on my cell phone but this time I chose a different path through the phone menu. I also made a change by choosing not to receive the survey. I got an instant human answer. Coincidence? Dunno.

After some questions and some typing, I got my $90 bill lowered to $59. Previously it was $55 so $59 is pretty good. The deal lasts for 12 months. It’s their Internet Plus plan with 75Mbps down. We do lose some cable channels but we watch so little TV I don’t care. We basically just get the local channels now and somehow that package also includes HBO which I’ve never had in my life. It’s good enough for a couple sitcoms and football. I think we could save $10/month if we dropped TV completely, but for now, that’s a reasonable deal. If I could find a way to reliably watch football games for a similar price, I’d probably drop the TV part of our package.

The last two times I’ve called Comcast like this, I’ve basically gotten the “new subscriber” price with no contract. It will be helpful to know this going in so I can figure out what package/price I want to end up with.