A laptop recently landed on my desk full of some lovely viruses. I won’t say who it was, but really, you shouldn’t be too embarrassed. These virus writers are good at what they do and it’s easy to be tricked. As I fixed up the laptop, I thought about a short series of blog posts that might be of interest to many of you readers, not just the household that got hacked. I’ll cover how virus writers try to get you through your browser, how they attack via email, and then what to do after you suspect you’ve been hacked.

The most common viruses get onto your machine because you clicked something. It’s pretty difficult to have a computer sitting idle with no human in front of it and get a virus. We are the weakest link. So when hackers try to attack you via websites, they’re going to present you with something that is out of the ordinary, but just plausible enough that you’ll click on it. These popups might seem fairly legit. Here’s an example: 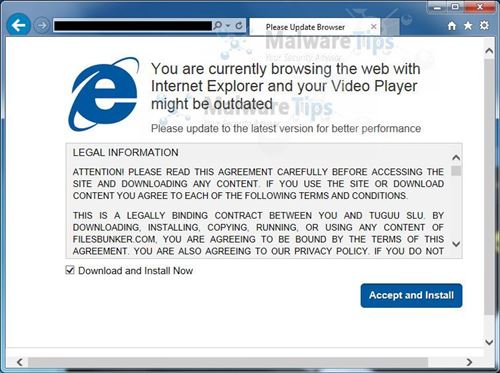 A geek will look at this and know it’s fake, but to the general populace, this seems like something serious that should be fixed by clicking Accept and Install. How can you tell it’s fake? That’s tricky but some basic ways are that this installation box is inside of a browser window. That’s your first red flag. What video player is it trying to update? If it’s going to install something, it should be pretty specific. If you have questions you could take that product name and search for it.

But really the best way to defend against this type of thing is to know the legitimate ways you’ll be warned about this type of thing and then be incredibly suspicious of anything that tells you to install something or “click here to fix your computer.” These days, nearly everything that is needed to fix your computer happens automatically in the background via Windows Update. You might see some notifications from Microsoft Security Essentials when you haven’t run a scan in a while but that’s about it.

You should also have Windows User Account Control enabled. Whenever a program tries to install on your machine or access protected areas of the operating system, it will pop up a warning dialog that asks if you’re sure you know what’s going on. Unfortunately if you believed something like the image above then this probably won’t stop you, but it’s a good backstop to really think about what you’re doing.

So if you get a popup that says you have a virus or that is asking you to install something unexpected, just stop. It’s probably a lie, but just in case it’s legitimate and Microsoft Security Essentials is trying to save you, snap a photo with your phone and email it to your favorite geek. Ask them if it’s legit and what you should click. You might save yourself a lot of trouble.