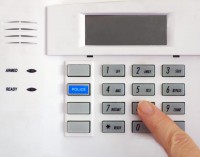 Some of you know that I installed a security system at our house instead of contracting it out to ADT or one of the other popular companies. I never blogged about the project, but it was a major project for me. The physical installation wasn’t very hard, but it took a ton of time to research what I needed to buy. I’m not going to go into specifics on this public site, but here is some of the basic info in case you’re interested in this for your own home.

The main reason you would probably want to consider this is that you can save a lot of money on your monthly bill. I think ADT is currently charging $37/month for their basic package. By doing it yourself, you can get the same monitoring coverage for $10/month. You don’t have to be a math whiz to know that saving $27/month adds up quickly.

Our house was previously serviced by ADT but there was no active service when we moved in. The panels that ADT uses are locked down. While they are standard models, they are tweaked so that you can only use them with ADT. The sensors that are already on your doors and windows are probably reusable. In our case, all of the sensors were hardwired and those are extremely simple to reuse. The “only” thing I had to do was replace the main control panel and the keypad.

In retrospect, I could have saved myself some time if I had just bought the exact same panel that was there before. It would have been obvious how to wire it up! But I went with a new panel mostly because I didn’t think of that option, and also because I wanted to be able to support wireless sensors. I’m glad the wired sensors were there, but I wanted to quickly and easily expand the coverage of the system.

Once I had the panel in hand, I carefully labelled all the wires on the old panel, disconnected the wires, and then reconnected everything. Programming is all done via the keypad and you’re interacting with 90s technology. Everything is done via long strings of numbers and you better have a firm grasp on the manual so you don’t get loss. It’s ridiculous, but it works.

I was able to confirm that the alarm worked locally so then it was just a matter of hooking it up to the phone line. You cannot use a VOIP telephone line (like the one you get from Comcast.) It must be an actual old-fashioned telephone line (POTS) or you can use a cellular monitoring system for a little extra money per month.

So is this a good DIY project? Ehhh… if you’re a geek and you’re willing to spend a lot of time reading manuals, you can figure it out. You’d also have the advantage of being able to call me up and learn from my mistakes. I’m thankful we have it but I spent a TON of time getting it going. I think a lot of that delay was because I was so nervous about dropping a few hundred bucks and then screwing it all up.

Our system has been rock solid and we use it regularly. We’ve only had one false alarm and that was attributed to a helium balloon slowly floating in front of a sensor. I love our custom solution because when I decide to add some more sensors, I can do it for $20-40/sensor. There’s no service call from a tech, crazy prices for installation, or additional monthly fees. And if I want to control it from my phone or hook it into a home automation system, it’s just some more research and purchases on my end. We’ve already added fire and carbon monoxide monitoring for a grand total of $0/month.

Is the system safe? Sure. I’m already using the layout that the “professionals” recommended for the house and then I’ve added more sensors on top of that. I can tell you that the fire sensors we got are exactly the same as the system that we put in at church for tens of thousands of dollars. A smart burgler could get through our system, but they could get through your ADT system at least as easily. I could spend more money to tighten up some of those holes, but at some point you just have to let it go. Having the sign out front is probably more important than the layout of our system.

I enjoy this kind of thing so it’s worth my time to save the money. Obviously the math is different for most people because companies like ADT are very successful!