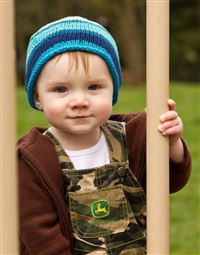 It’s been nine months since I wrote the last “Elijah Update” post! I’m not even going to attempt to recap what has happened since that last post, but I’ll give you a summary of what’s going on in his life recently.

He’s gaining new motor skills every week and on Sunday he took his first steps! Tyla’s family happened to be at our house when Elijah let go of his little push toy and took about 5 tiny steps toward the grill. That’s my boy! You can see him thinking really hard about each movement to take a step and he still needs to build up his confidence, but I bet he’ll make rapid progress in the coming days and weeks. Lots of people says “Keep him as a crawler as long as you can” and stuff like that but I’m excited to have my little man walking! Yes, it’s more work, but by now I’ve figured out that being a parent isn’t something you do because it’s easy.

Elijah was really quiet for his first few months but now he’s always making some kind of noise. There was a period of shrieking which (I hope) is passed, at least for now. He loves to babble and make seemingly random noises and will sometimes even imitate our coughs and achoos. When he’s really excited, he kind of turns his tongue sideways and makes a sucking sound.

Milk is still the main food of the day but he’s experimenting with other foods that Tyla and I eat. He sits in his high chair for most of our meals and does some combination of smearing it on his face, dropping it down his bib, and putting it in his mouth. I don’t think he’s quite made the connection that this type of eating will also solve his hunger pains.

Night times are still a battle though we’ve kind of settled into a workable truce for now. We’re going on 11 months of not sleeping more than 3-4 hours in a row except for a couple somewhat random stretches when he was very young. This is probably the single most painful part of parenting for me (and I’m not even the one who has to stay awake to feed him!) and I’m praying that we get to a better spot soon.

We’re very blessed to have such a wonderful child in our home! 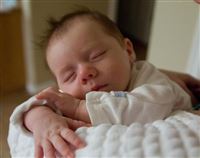 Our little man is now seven and a half weeks old and he’s not so little anymore! He’s gaining wait at a good rate and seems to be very healthy. He can hold up his head while laying on his stomach and is just starting to give us some of his first intentional smiles. When we’re out and about, we keep him in the Moby wrap most of the time because it both keeps him really calm and quiet (or sleeping), and it helps us avoid passing him around a lot. Pertussis (whooping cough) is still at crazy levels, and I just heard that there are a disturbing number of cases of measles appearing in the area and he won’t get that vaccine for quite a while. So we’ll be the over protective first time parents and keep him in the wrap.

Nights vary widely from feeding every 60-90 minutes to feeding every 3 hours. The latter is obviously a lot easier to deal with! We’ve gotten in the habit of going to bed around 8:30 which usually gives us enough sleep throughout the night. The other night I had to chuckle as I wished the 5 year old kids outside would be quiet so I could go to bed.

Tyla is doing a fantastic job staying at home with him. She has a good schedule set up to get out of the house and meet with other moms. It’s a ton of work for her, but she’s a great mom!

We’re experimenting with pumping and bottles so that Tyla can get a few hours out of the house. So far that’s going pretty well but we haven’t pushed it very far yet.

Parenting is an unbelievable amount of work but it’s so rewarding to look down at this little guy. We love you Elijah!