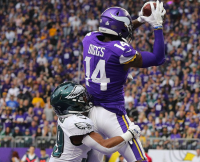 The Seahawks find themselves at 5-1. They took a very interesting route to get there and it’s hard to argue that they should have won every game, but in the end, they are finding ways to win. Next they have the Ravens at home. We’ll see if the refs blatantly pick the winner for this game like they have so boldly been doing in other games. Monday Night Football was particularly atrocious this week.

In our league, Luke’s reign of terror was brought to an end by Dad. Nick put together his best game of the season but didn’t quite find that first win. Next week the top four teams all square off against each other in what might be a preview of some playoff matches. The rest of us will run around aimlessly at the bottom wondering why we can’t score more points.

I’d like to take a minute to point out that the New England defense is going wild this year. They are the 11th highest scoring “player” in the league behind 9 quarterbacks and Christian McCaffrey. Who would have guessed they would be outscoring Aaron Rodgers in Week 6? Kudos to Tyler for that waiver pickup.

Tim is doing really well to still be up there in second place. He’s had the most difficult schedule so far. The weekly power rankings still have Luke on top though.