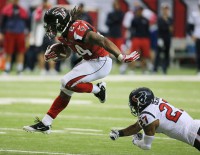 Whew, the Seahawks squeaked out an ugly victory against arguably the worst team in the NFL. But even the Lions were able to run through that porous offensive line. Jimmy Graham is great, but was losing Unger worth it? And then we had “batgate” after the game was over. Apparently the touch in the endzone was illegal. Yes, it would have been better if the rules were properly enforced, but I don’t feel nearly as bad about this one as I did about the Packers one. Nobody seemed to even notice that something incorrect had happened (or maybe I just missed it as I fast forwarded to get to the action.)

We had some close games in our league. Luke and Andy faced off to see who would win their first game. Sorry Luke. Maybe next time? You are the closets to Detroit so I guess it fits. We had a lot of low scores, but looking at the rosters, a large part of it was some surprises about who made the points. There were a lot of points on the benches this week. I’m trying not to mention my streak because I know it will go down in flames.

The power rankings are back! Here’s what my super secret, proprietary formula says: