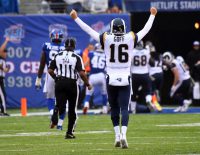 The Seahawks had another close game, but in the end the penalties. missed field goals and broken plays because of the offensive line were too much to overcome. It has to be painful as a field goal kicker when you miss THREE field goals and your team loses by three points. Just making ONE of them could have sent them to overtime.

Our league continues to be a free-for-all. Last week, Luke had the highest team score and Andy had the lowest. This week they flipped. Tim had the second highest score in the league hinting that maybe 8th place isn’t where he will end up. With 5 games left until the playoffs are set, everyone still has a chance. Logan and Luke are still looking good with their good records and high point totals.

Deshaun Watson was the second highest scoring player in our league up until his season ending injury. Let’s take a minute to review his progress through our league:

He played a total of one week in our league! I had finally made the obvious decision to start him regularly and I even picked up his favorite target (Will Fuller), and then… bam. Out for the season. I think we all deserve a face palm for missing out on all those points up until his injury.