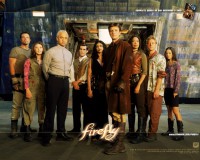 Say the word “Firefly” around a sci-fi geek and they’ll get all giddy and sad at the same time. The show only ran for one season (14 episodes) back in 2002 but it has a huge following. The show isn’t super high budget, but it’s plenty to be entertaining. It unabashedly mashes the western genre together with sci-fi and the result is great. The premise is that humans have been expanding across the galaxy and the outer planets were settled with basically people and some livestock. The show follows some a crew on a ship that takes whatever transport jobs they can find whether or not they skirt the edge of the law.

It’s all available for free on Amazon Instant Video if you have a Prime subscription. I finally watched the show and loved it, but now, like other fans, I’m disappointed that it’s over and there are no more available!