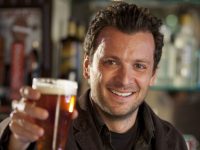 I first stumbled across Zane Lamprey when he had his Three Sheets show on a now-defunct cable channel called MojoHD. If you’re a Hulu subscriber, you can still watch the whole series and I highly recommend it. After Three Sheets, he had a show called Drinking Made Easy and then a Kickstarter show called Chug. All of them are travel/alcohol shows that mix comedy and learning about other cultures and their drinking customs. It’s a great formula that never seems to quite stick with the people writing the checks.

Now he’s off filming again for something he’s referring to as Four Sheets.There’s a Facebook page for it, but I can’t find a lot of other details. I know a few of you are fans as well, so you might want to follow that page and his Instagram account in hopes of finding out how we’ll be able to watch these new episodes.