Sometime back in February or March, I picked up a new RC airplane kit. Just like my previous planes, this one was from the guys at FliteTest. It was a kit for the FT Duster and instead of getting the regular electronics package, I decided to step it up and get something more powerful. I went with “The Beef” package from Lazertoyz.com. I still haven’t seen the move Planes yet, but this RC plane is designed to look like the lead character in that movie.

Even though I’ve had it for so long, I just finished building it last week. I was spending so much time on house projects (including the back yard) that I just didn’t have the energy to spend on a hobby.

The build itself went pretty smoothly, but still included a few screwups. It wouldn’t be a project of mine if I didn’t mess something up. It’s just foam, hot glue and tape though so everything is fixable. I was so excited to get out and actually fly it that one night after putting Elijah to bed, I hurried down to the park before dark to see if it would fly.

The plane has optional landing gear but I decided to put some on. Actually I didn’t build new landing gear. I just borrowed it from one of my previous planes. When I tried to take off, the angles weren’t right and the landing gear folded underneath so I hand-launched it instead. My plan had been to just take a short hop and then land, but hand launching requires more throttle so I just took off into the air. I immediately knew I had a problem: the plane was a bit too nose heavy and I didn’t have enough elevator control to overcome it. Extra throttle gave me enough lift to stay in the air, but that’s not a great solution. I wanted to get it back on the ground as quickly as possible to try and fix it before things got worse… Cutting the throttle meant that the nose came down and I couldn’t hold it up with the elevator so I landed pretty hard. The landing gear (which I didn’t really need in the first place) and the extra speed combined to rip the entire wing off the fuselage. Ugh. 6 months of waiting and then I had a destroyed plane in 34 seconds. 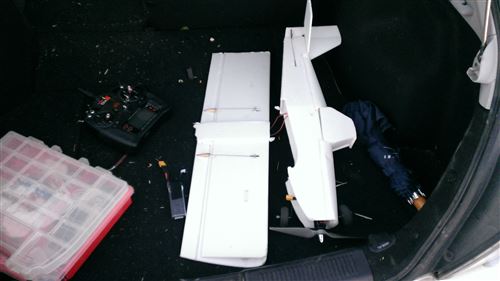 As I was driving home, I realized that I put myself into this pickle with my fancy new transmitter. I had adjusted the travel on all the control surfaces to be relatively tame, but that backfired by not giving me enough control to overcome the nose heaviness. If I had been quicker in my thinking, I could have switched to the “high rates” mode and gotten a little more travel on the elevator.

Thankfully some hot glue and tape fixed the plane back up and you can’t really tell it was in such a major accident. I swung by the park for a quick flight on the way to work the next day. I double-checked all my settings, adjusted my transmitter to give me more throws on the elevator and then hand launched without the landing gear. It flew beautifully! I had no idea how long the battery would last on this plane so I came back in after 7.5 minutes, landing slowly enough to not do any damage. I then took this “Hurray! Success!” photo. 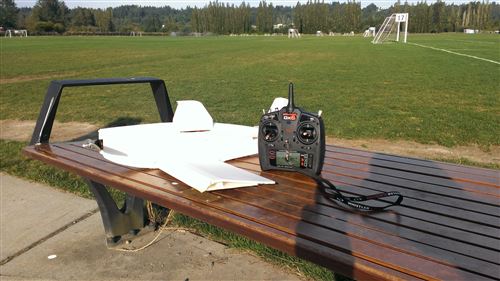 But of course the story doesn’t end there. I got my battery tester out and realized I still had a little over half a battery left! Time to throw it back in the air. As soon as I took off the second time, I noticed that the plane was MUCH more touchy. I figured out that I had accidentally bumped the “high rates” switch on the controller and generally that’s good to leave off for takeoff and landing. Well I tried to get it all corrected but it all happened so fast that I nose dived in from about 10-20 feet up. That broke the prop and the motor mount, but again, those are fixable/replaceable.

This is roughly the course that each of my scratch builds have taken. It’s nice to only have a few dollar worth of foam in the air though! I would be a lot more disappointed if I had just crushed a fancy balsa model.