There’s a lot of gun violence in the news. I’m not going to get into the politics of it, but it did make me take a look at how bad things really are. Here’s the hypothesis that we’ll test: Gun violence is worse than it’s ever been before.

First, a couple caveats. As a data scientist, I know first hand that data can be beaten into submission to “prove” any hypothesis you want. It takes extra work to really let the data speak for itself and possibly disprove your hunches. And on a related note, it’s difficult to find good data sources. Articles are not reliable because they’re generally very doctored to get their intended point across. The bigger, more reliable studies that publish raw data don’t publish data every year.

The most reliable numbers I could find were from the CDC’s National Vital Statistics Reports published in February 2016. Unfortunately the data in that report is from 2013, but it’s the most recent and trustworthy that I could find. That report states that in 2013, 11,208 of those were firearm homicides. That comes out to 3.5 people out of 100,000 or 0.0035% of the population. Other causes of death in the same range are aortic aneurysms, emphysema, multiple myeloma, stomach cancer and intestinal infections. Homicides by firearms accounted for 0.4% of the all deaths in 2013. By the way, do you want to know what the top three causes of death were?

Those are all numbers from a single year. The original hypothesis was that we’re worse off than we were before so let’s look at some trend data. I spent a bunch of time doing searces in the http://wonder.cdc.gov system. It has data for 1999-2104. Here’s the summary I built for that data:

I had no idea that 45% of gun homicides were in the south! But back to the main point: those numbers don’t show much change. But hold on. They are slightly misleading because they are raw counts. The population grew significantly over that time range. We should be looking at the number of deaths per 100,000 people. That average has decreased: 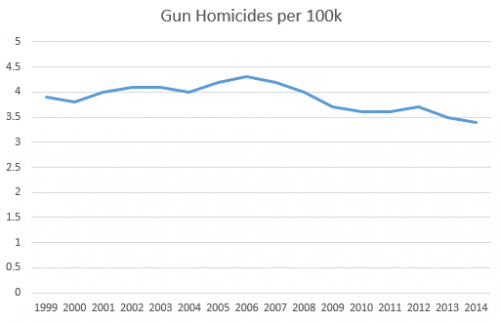 We’re not finding much data to support our hypothesis, but what about pre-1999? I couldn’t find data in that CDC system pre-1999, but I did find this chart showing that we had a peak in the 90s that was much worse than today. This data comes from the Bureau of Justice Statistics via Wikipedia. Note that these numbers are a bit lower than the CDC numbers for the overlapping years. The CDC has their gun homicide deaths broken down into a number of categories (rifles, shotguns, pistols, terrorism, etc) and I’m guessing the Bureau of Justice Statistics has a slightly different categorization. However, I think it’s still valuable to look at the data: 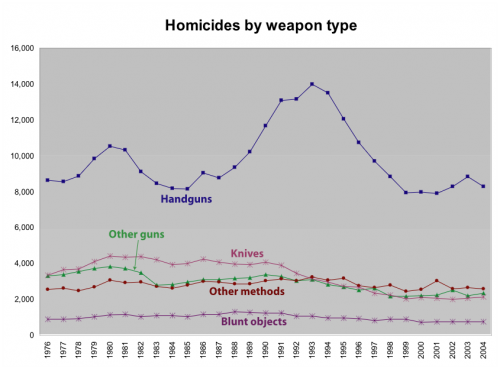 I lived through that huge spike of gun homicides and had no idea that it existed.

I learned that you have to be really careful when comparing numbers because “gun deaths” can mean a lot of things. Some sites will include suicide by guns in their numbers. Suicide with guns are roughly twice as common as homicides with guns so they really change the numbers. Other articles will do their ratios and percentages based on people under 25. A large majority of the gun violence happens to and by people under 25. Some sites even include war related deaths in their gun numbers. And as you saw above, even reporting the raw totals can be used to trick people if you’re intentionally leaving out the fact that the population changed over that time range.

Do we have a problem? Yep. Would it be a horrifying event to witness? Yep. Should we analyze the data and run experiments to see how we could improve the problem? Yep. Is it worse than used to be? Nope.

P.S. Will any of this data stop people from yelling at other on TV? Nope.