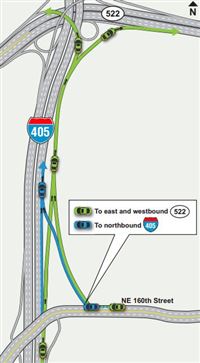 We live off of I-405 so we have been watching the huge construction project for the last couple years. The project page has all the details, but basically they are adding an HOT lane (carpoolers use it for free, single occupancy cars can pay to use it) and fixing the interchange where we live. Cars going from 405 to 522 had a hard time merging with cars going from 160th to 405.

I had thought that after the change, we wouldn’t be able to get onto 522 from 160th St anymore but it looks like they have accounted for that in the design. That’s great for us because it means we’ll be able to head out that way without driving through the traffic mess in Woodinville.

The people who bought those townhomes right along the new braided exit ramps are going to be treated to an enormous sound blocking wall right outside their balconies. They’re going from having a view that had about 3 or 4 rows of trees between them and 405 to seeing a concrete wall 10-20 feet away. Ouch. At least the real estate market is starting to recover around here so some of the decrease will be masked.

And since I mentioned real estate, here’s a semi-related factoid: the guy who bought our condo from us sold it a few months ago. He sold it for about 20% more than he bought it so he made a little money after all the fees and taxes. Our house has gone up about 3-4 times as much as that condo did though so I still think it was a good financial move. (And it was a great move for many other reasons.)

After I bought the house out in Sammamish, there were a couple major projects along 202 and 520 that really sped up my commute to work. Now that we’re up in Kirkland, it looks like the upcoming 405 project might have a similar effect, or at least that’s the plan.

There are a bunch of parts to the project, but the biggest one for my commute is the widening of 405 between Bellevue and 522. It looks like the two new lanes that are being added (one NB, one SB) are going to be express lanes between NE 6th and 522 so I won’t be able to use those, but hopefully they will siphon off some of the traffic on the local lanes. They’re also converting the HOV lane into a "high-occupancy vehicle toll lane” which means you can use it for free with 2+ people or you can pay if you are alone. The fee varies based on the amount of traffic on the road. More is happening north of 522, but I haven’t dug into those documents yet.

In addition to the new express lane, they are also rearranging the ramps from northbound 405 to eastbound 522. Previously we used to hop on 405 from 160th street and immediately exit east onto 522. Once they finish the braided ramps, we will have to find a slightly different route up to Tim and Chelsea’s house because the entrance from 160th street will put us on 405 after the exit for 522.

Construction is expected the start this year and complete in 2015. That’s quite a long project, but it’s a band-aid that needs to be ripped off. Traffic can get pretty rough on that stretch of road!