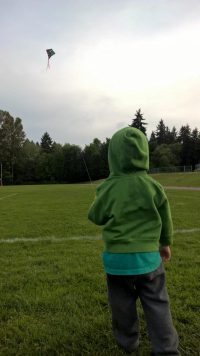 We had a classic sitcom moment in the park this week. A couple months ago, Elijah was given a cheap kite while he was out shopping with Tyla. The weather, the wind, our schedules, and our moods all finally aligned and we headed down to the school football field to try to fly it.

There was about a 1″ square picture showing how the strings were supposed to be tied on and 2/3 of that picture was covered by a UPC sticker. How hard can it be right? I got the strings attached and tried to launch it. For some reason it kept flipping around so the string was coming out the “back” of the kite and wrapping around. It obviously didn’t fly very well and I realized that duh, I tied the strings on wrong.

By then I had already knotted the incredibly tiny string so much that it was impossible to undo so I had to cut it. Thankfully Tyla suggested that I use some of the string that was wound around the handle to get the kite strung up and that worked great.

Fifteen to twenty minutes later, I finally had the kite in the air. Elijah tried it for about 30 seconds and then took his shoes off and went to play in the “sand box” (the long jump pit.)