Search for “marquetry” images and you’ll be blown away at the art form of combining small pieces of wood to make amazing pictures. I’ve been intrigued by this, but I’m a nerd so I did it on a laser cutter. I thought it would be way easier and it probably was…. but it was still a challenge.

A while back, David Picciuto from Make Something sent me a box of small wood scraps. There were a lot of very interesting species in there, but they were so tiny it was hard to think of something to do with them. (Kinda makes sense why he would give it away, huh?) Then I hit upon the marquetry idea.

A butterfly seemed like a good first attempt so I found an image online that was close to what I had in my head and then tweaked it and made it into a laser cutter file. I spent many hours tweaking my design with test cuts at the laser cutter to get it as intricate as possible without making pieces so small that the kerf of the laser would totally obliterate the tiny piece.

In the end, I combined coconut palm, walnut, maple, purple heart and a couple other woods that I don’t know the names of to make the butterfly you see below. It’s pretty fragile, especially the antennae, but it at least held together long enough to take a photo. The dark outer wood is the coconut palm. In addition to the top border that you see, I also cut a solid bottom piece that everything glues on to.

This one is a Christmas gift for Mom. Merry Christmas! 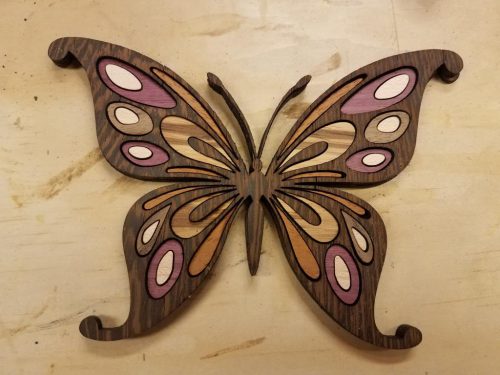