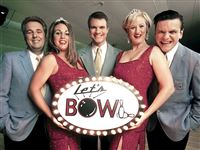 Back in 2001 and 2002, there was a great show on Comedy Central called Let’s Bowl. It was a combination of Judge Judy, Most Extreme Elimination Challenge, and a bowling alley. The idea was that two people would arrive looking to settle some small disagreement. Whoever won the bowling match would win the argument. During the match, two hilarious commentators provide play by play. There were numerous funny segments throughout the show, special prizes for strikes in specific points of the game, and each player gets to use a surprise air horn once during the game to throw off their opponent. If it all sounds crazy, it is. But it worked, and I loved it! Unfortunately, I must have been one of a few viewers because it only lasted two seasons. Ever since then, I’ve searched the web looking for DVDs of the show or some way to watch it again. Late one night last week, I found yet another site claiming to have the episodes available for download but this time it actually worked! The video player on the page doesn’t work but the download link does work. I highly recommend that you go snag an episode (skip the pilot episode) and check it out if this sounds at all funny to you.