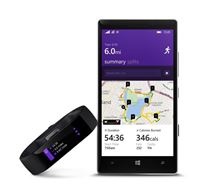 I ordered a Microsoft Band the morning that they were announced. It’s an intriguing little device and I was already in the market for a watch device that would log GPS points for me.

First of all, the device works with Windows Phone, Android or iOS so pretty much no matter what you use, you’re included. There are a ton of sensors packed into this thing: mic, heart rate monitor, GPS, accelerometer, ambient light, galvanic skin response, and even a UV sensor. Those sensors let it act like a standard fitness device tracking your steps, your heart rate, etc and if you’re on a run you’ll get your GPS track too. It connects to your phone via a Bluetooth connection so you can get notifications about new text messages, emails, phone calls, Facebook messages, etc. It pretty much does everything that a fitness tracker or a smart watch do but it does it all in one device.

The LCD screen is a touchscreen so you can navigate through the various options and scroll through your notifications. The screen is really nice, but to read it easily, you pretty much need to wear it with the screen on the bottom of your wrist. That’s fine but you’ll want to make sure you use the included screen protector since it’s always banging on your desk. The other downside of wearing it upside down is that the heart rate monitor has a harder time locking onto your heartbeat. When I look at the chart of my heartbeat, it’s very spotty.

The app is a key part of this device. It let’s you adjust what notifications get sent to your band and it also displays more of the detailed information that it collects like your heart rate graph and a map of your run.

They say the battery lasts 48 hours if you’re not using GPS and that seems pretty accurate. I’ve been skipping the sleep tracking portion so I just turn it off at night and I can easily get 3 full days out of a charge.

There’s a ton of tech packed into this thing, but that brings up the biggest downside for me: it’s huge. All smart bands/watches are bulky to some extent, but this one feels pretty uncomfortable. Now you should know that I haven’t worn a watch in well over a decade so anything on my wrist feels weird, but this bugs me more than a watch. There are sensors and batteries around almost every part of the band. If it was more of a cloth/leather band, it would be a lot more comfortable but they obviously couldn’t fit everything into that form factor. It’s so big that I have a hard time getting my sleeve cuffs over it. If I tighten it down so that it fits under my sleeves better, then it’s really uncomfortable.

Is this cool? Yes. Am I going to keep wearing it? Nope. I forced myself to wear it for a week to give it a chance, but it’s just too annoying. I loved having notifications available with a quick glance at my wrist but that doesn’t outweigh the awkwardness of wearing it. If you want to buy one, go try one on at a Microsoft Store first.

Wearables probably are the future of tech, but we haven’t broken through to something really useful yet. (And no, the iWatch Apple Watch isn’t the answer either.) We’re going to look back at this whole generation of gadgets like we look at Palm Pilots and the Newton. We’re headed in the right direction but we still need to crack the code.

So is the Band a huge failure for Microsoft? Partially, but not really. This article talks about how the Band is a demo device for Microsoft to promote the bigger success in this picture which is their backend service/app called Health platform. They are trying to combine all these crazy independent silos of fitness and wearable data sources. It’s a great idea and hopefully it will take off even if this iteration of the Band doesn’t.