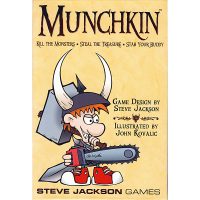 Monday and Tuesday started with board game posts so let’s just go for a whole week of board games. Up today is “Munchkin“. This game starts off easy and gets more complicated as you play. Everyone starts off at Level 1 and is trying to become a Level 10 munchkin. You gain levels by defeating monsters that you encounter, and you defeat monsters by using items you have acquired and deals made with other players.

Every card you play has the ability to dramatically change the game and even change the rules of the game to some extent. The game is intentionally comical and open to definition. You’ll run into situations where the various rules conflict or are vague and you just get to argue it out. The instructions make this very clear from the start by explaining how to start the game. It says: “Decide who goes first by rolling the dice and arguing about the results and the meaning of this sentence and whether the fact that a word seems to be missing any effect.”

During the game you might find yourself as an elf carrying a flask of glue wearing pantyhose of giant strength, but if that all helps you defeat a maul rat then you just gained a level. Let’s just hope someone doesn’t curse you with a sex change.

There’s plenty of strategy and it takes a lot of concentration to figure out how to apply all the wild cards in your hand to win the game. I love this game but it’s on the complicated side and can take a while. If you somehow get bored of the base game, there are endless numbers of expansion packs available.