When Tyla’s dad was in the Navy, he served on the USS Hector fixing clocks. He ended up with one of the clocks from the ship and for his birthday this year, the kids got it fixed up and running again. It sat on a counter in their house until I snagged it and mounted it for his Christmas gift.

I was able to make it with some scrap walnut and maple, but just barely. After I had it all done I realized that I should include a place to hold the winding key. It was kind of hard to work that into the design so I carved out a spot on the top where it can rest. I took the piece of maple to work to use the laser engraver there. The clock has two keyhole mounts routed into the back so hopefully that will be enough to hold the heavy clock onto the wall. 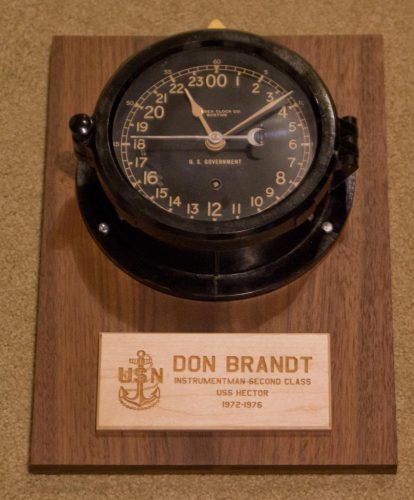