I’ve written before about making a crosscut sled for the table saw. I used the first one so much that it kind of wore out and I had ideas for improvements so I made another. They’re incredibly convenient especially for the smaller toy projects that I was doing. It’s a very safe and precise way to cut small pieces (among other things.)

My new table saw had miter slots that were a different width so I needed to build another sled. This time I incorporated some t-track and a flip stop that slides in that track. This allows me to get repeatable cuts with the stop but I can also flip it up after I set the position of the piece to avoid any binding between the blade and the stop.

The process was pretty much the same as previous builds, but because I had a much more precise saw, I decided to spend extra time squaring up the fence to get perfect 90 degree cuts.

I used my big square to get it initially set close to 90 and then did the 5 cut test to see how far off I was. Watch that link to see it in action, but basically you make a cut, rotate the piece, make a cut, rotate, etc. You do that 5 times and then you measure the width of the last slice at the top and the bottom. That helps you calculate how much out of square your sled is because it really magnifies the error. I was so far off that it was plainly visible to the naked eye. How could that be when my square said I was spot on? I futzed with it for quite a while and then got frustrated and walked away. During my break, I realized that the only explanation was that my square wasn’t square. Indeed it wasn’t! 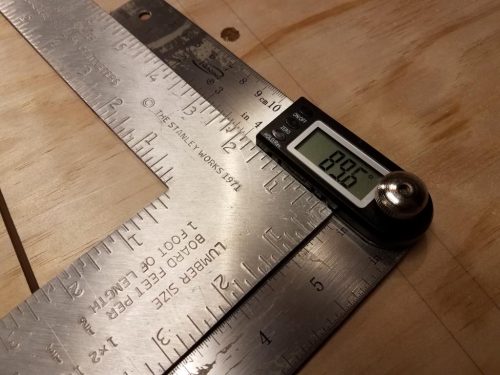 So I changed up my method of dialing it in and got it to a point where over a 40″ cut, I only deviate by 0.001″ from being perfectly square. That’s insanely perfect. In fact, it’s so good that I suspect I’m within the margin of error for my setup and my measuring tools. Plenty good enough for me. 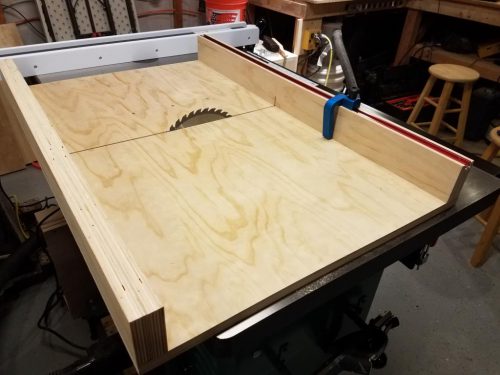