This post will probably embarrass Tyla, but I need to share the incredible project that she recently completed. When I met her in 2008, she had a LOT of stuff. She wasn’t ready for hoarders, but let’s just say a box of random rocks had been transported more miles than anyone cares to count.

I think a lot of people reach a point where they realize that mental, physical, and monetary burden of having too much stuff is worse than the emotional burden of tossing/selling it. For me, it was some point when I was moving back and forth between Jersey and Minneapolis. Cleaning house was difficult, but it feels incredible to not have tons of junk following me around waiting to be organized. Tyla got to that point around the time I met her. If you ask her, she’ll attribute much of that decision to a book called Clutter’s Last Stand.

So for the last four years, Tyla has been spending random weekends and evenings going through her boxes. She gave some of it to me to scan and photo before throwing away, some of it got donated, some of it got thrown straight into the trash can, and some was important enough to keep. We both wish that we had some way to count the numbers of carloads that I took to Goodwill or the trash cans that got filled up. It would be an astounding visual. In the end, this is what’s left: 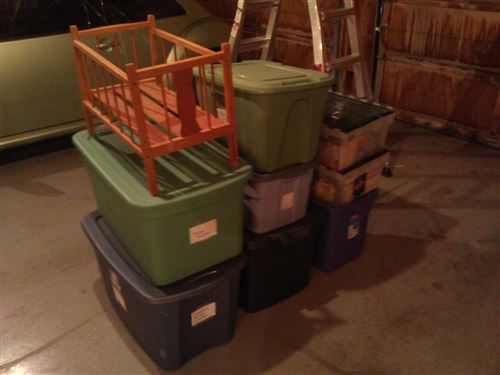 I’m so proud of her for finishing this seemingly insurmountable project one box at a time!