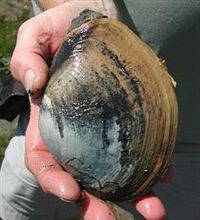 When we were walking along the beach at low tide, we were startled when streams of water started shooting up around us. Most were only about a foot high but some shot four feet up in the air. We couldn't see what was causing it, but after some research, I think I have figured it out.

The mystery animal is a Pacific gaper clam, also called a horse clam. They live 6-12 inches under the surface and have a long "neck" that sticks up to the surface as a siphon. When they are startled, they quickly retract the siphon which shoots water up into the air.

It was hard to get a photo since each shot happened so quickly. I took a bit of video which is embedded below. I don't know if you can pick out the streams of water. There's one at 0:03 seconds in the lower right quadrant, one at 0:08 on the right middle, and one at 0:14 on the left side.