Are there albums or songs that remind you of your parents? When I think of my parents and music, there are pretty clear associations.

For Mom it was Chicago’s “Greatest Hits 1982-1989” album. I remember her putting that album on while she cleaned the house. (It’s not available on Spotify but somebody built a playlist to piece all the songs together.) I think she had this one on CD and we didn’t get into CDs until the mid 90s. 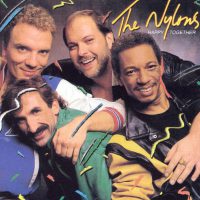 And Dad? I remember riding around in his Ford Probe listening to the “Happy Together” album by The Nylons. That one got a good workout. I know he loved the 8 track system in his Gran Torino Sport, but I was too young to remember the music that got played in there.

Random sidenote: The song “Happy Together” was used in Ernest Goes To Camp (easily the top movie of my childhood) and since Dad was always playing The Nylons, I assumed that they had written the song. Nope. It was from a band in the 60s called The Turtles. So now I get why they had to sing that specific song to the turtle to get it to unclamp from Ernest’s nose. Whew, took me a while (decades) to get that one. It’s the movie that keeps on giving.

One thought on “Parental Albums”