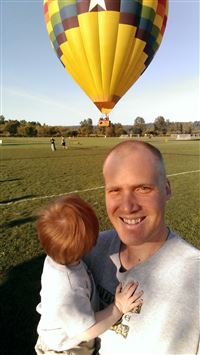 After many attempts, I finally gave up on my FT Duster. I finally figured out that a crash somewhere along the way had caused the tail to be out of whack. I used the heat gun to melt the glue and remove the old tail, fabricated a new one and then installed it. Everything was square and it actually flew pretty well. But then, mid-flight, the power pod broke loose and the plane spiraled hard into the ground. The fuselage was pretty bent up and correcting it basically would mean rebuilding a plane. It’s only a few dollars work of foam board but I’ll save that for another day. I was getting too frustrated with it to continue.

Instead, I pulled out the plans for an FT Nutball which is MUCH simpler to construct and fly. I had it together in an hour or two and the first time I powered it up, it flew great! I ran into another problem though. Elijah was afraid of it. He’s never been afraid of the planes before but for some reason, he just wasn’t happy whenever it was in the air.

I landed before using up all my batteries, but as I was cleaning up, I noticed three hot air balloons making their way towards the park! They make regular morning and evening flights down the valley and we can see them from our house. But this was the first time I’d been at their landing spot. We stayed around for about an hour watching them land and pack the balloons away. Elijah enjoyed watching them, but he was more impressed by the park’s John Deere Gator that was driving around in the parking lot. That boy loves trucks!