One of the afternoons over my Christmas break, I heard a truck idling in the cul-de-sac for 10 minutes or so. That’s usually some kind of delivery truck so I hollered down to Tyla and Elijah that they might want to check it out since Elijah likes that kind of thing.

Elijah ran to the front bay window and could see part of the truck. “Mommy? Why is that truck smoking?” Huh!? Tyla took him outside and saw a recycling truck parked there. It was indeed smoking and a nervous driver was walking around with a fire extinguisher. Tyla said, “Is everything ok?” “Uh… yeah… yeah… everything’s ok.”

A few minutes later, our little street was full of firetrucks. They unrolled the hoses and hooked up to the fire hydrant on our street. (Neighbors claimed it’s the first time that hydrant has been used in the 26 years since it was put in.)

The fire was somewhere in the recycling that the truck had picked up. The firemen quickly determined that they would have a hard time putting it out inside the truck. Also, it was a natural gas truck and they were nervous about some of the piping that runs over the bed of the truck. So how do you solve that problem? “DUMP THE LOAD!”

As the driver was dumping it, you could see flames coming out. The firemen dove in with rakes and the water hoses and had the fire out in a matter of minutes.

That whole process probably didn’t take more than 10 minutes. Then it was cleanup mode. The firemen rolled up all their hoses and handed out hats to the kids that had gathered around. Elijah was nervous but loved seeing all the fire trucks so close by.

After the firemen left, they had to leave the pile in place for the inspector. Tyla chatted with him briefly and learned that the root cause was someone who had thrown hot fireplace ashes in the recycling. Smart.

After the inspector was done, a dumpster got dropped off. Then a cleanup crew showed up with a Bobcat and a backpack blower to load everything into the dumpster. The dumpster got picked up and eventually a street cleaner came for the final pass.

I was really impressed with how Waste Management handled the whole thing. I’m sure this isn’t the first time it has happened, but they did a great job. They had someone on site managing the cleanup until the pile was gone and the contractors they used did a good job of cleaning up the street and our yard (about 5% of the garbage ended up in our planter area and yard.) We still pick up some small pieces of trash in the yard every now and then but overall, I’m amazed at how good it looks and little they damaged our yard. 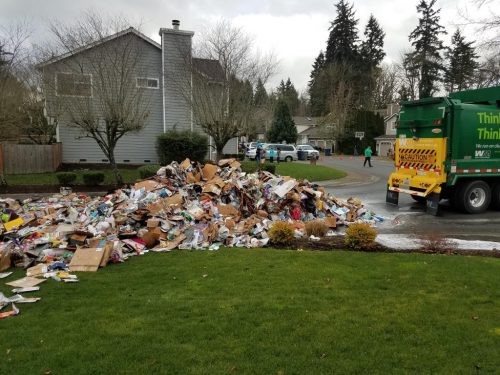 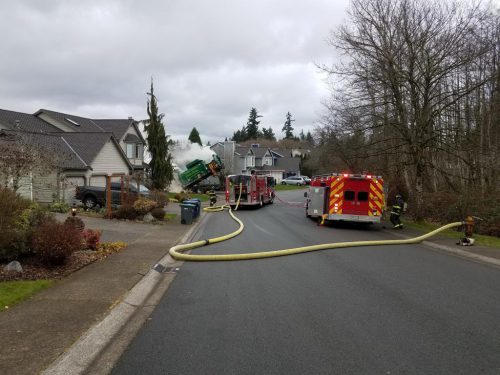 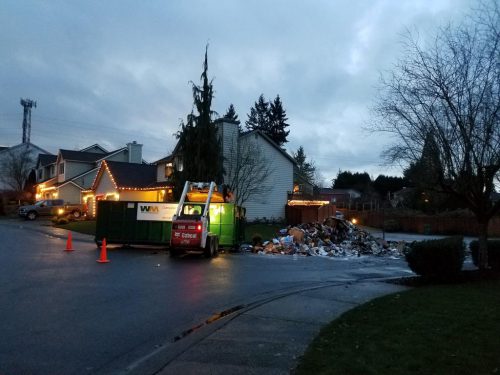