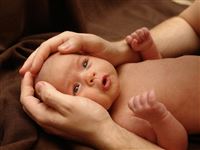 Last week I went to the doctor not knowing what was wrong and he diagnosed me with shingles… that disease that supposedly only affects older people. The doc said it can be caused in younger people because of stress, and coupled with some other stress related medical stuff I’ve had this year, I apparently need to take more time to relax.

But anyway, from a geek perspective, I found this interesting enough to blow right through that “Too Much Information” barrier and blog about it:

Concern that I would give my newborn son a disease sent me to the doctor much earlier than I would normally have gone. That was a great move because catching it in the first 72 hours makes it much more treatable. The doctor said there was no concern about passing it on to my pregnant wife or to my newborn son. We double checked with our OB and she completely agreed. Woohoo!*

So while this week has not been at all fun, I’m very happy that it won’t affect my wife or my son!

PS. Please note that advice was given in my specific case. Don’t extrapolate to your situation. Talk to your doctor!