Elijah got hammered by some kind of bug about a week and a half ago and a few days later, I got what appeared to be the same thing. Thankfully Tyla has somehow managed to stay healthy throughout this and she’s been an enormous help. Our nights have been long (Tyla’s have been longer than mine!) trying to keep our coughing, sneezing, snotting boy asleep and content. Throw in a time change and it really has made for some interesting nights.

So that’s why you haven’t seen as many pictures of Elijah lately if you’re friends with him on Facebook. While we do post lots of photos of him, we are trying to make some judgment calls about what we post since it will all still be alive on the Interwebz when he’s older. We’ve decided no bath photos, no sick photos, and no status messages about major diagnoses.

Every parent should draw their own line, but it’s an important decision to make. This is the first generation of kids that is going to grow up with every day of their lives documented. It’s hard to predict how that will play out, but we’ll make our best guesses. I just try to picture 15 year old Elijah standing in a group of friends when they find the mother lode of pictures, or an employer who has the ability to datamine old status messages and find out if there are any major mental or physical weaknesses in this employee he is about to hire. It’s impossible to predict perfectly because everyone grows up with their own ideas of humor, but hopefully we’re making good choices.

Enough of all that, let’s see a picture already! Here’s Elijah wearing his first Halloween costume! 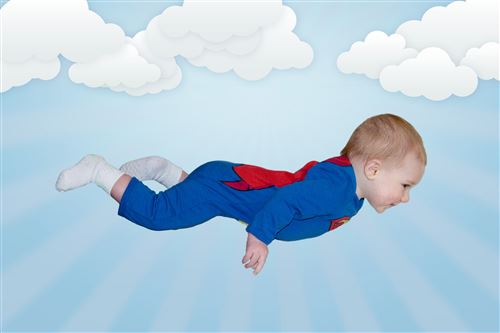 Mom is scanning in the slides from our childhood years so I now have access to a lot of my childhood photos. Want to see my first Halloween costume? 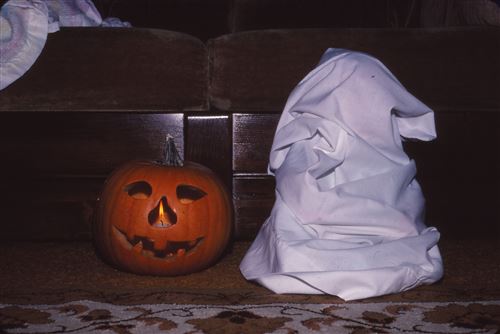