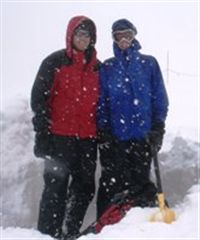 A guy on my team at work, MikeD, has been talking to me about backcountry skiing for the past year. He did it for a long time in Colorado before moving to the Seattle area. He finally convinced me to give it a try, so Friday morning we set out for Camp Muir on Mt. Rainier.

The hike starts off at Paradise at an elevation of 5400' and goes directly up the mountain to Camp Muir at 10,188 ft. That camp is the basecamp for groups attempting to make the summit at 14,400'. Our hike was about 4700 vertical feet in 4.5 miles. That's about constant 20% grade which is much steeper than most road hills you'll encounter. For comparison, Lombardi Street in San Francisco is 31.5%. This route was steep.

Normal ski gear won't work for something like this so I rented a few things from Marmot Mountain Works in Bellevue. I got an avalanche beacon (for being rescued or for locating the position of a fallen skier), fat powder skis (Black Diamond Vertex 180s with a 100mm waist!), special climbing ski boots and climbing skins for the base of the skis. The skis have special randonnee bindings on them. The heel of the binding can come out of the ski and hinges on the toe. The skins that stick to the bottom of the ski allow you to slide forward but give you traction when you step uphill. What all this gear allows you to do is climb straight up a hill on your skis in a fairly comfortable motion. It took a few steps to get used to but after the first five minutes I was in the groove.

We expected to hike the first mile or two with our skis attached to our large ~30lb packs. Boy were we surprised when it started snowing well before we even reached Paradise! By the time we got to the parking lot, the Subaru was plowing through 5-6 inches of fresh snow and it was still coming down fast. (3-4 more inches fell while we were there and a foot was expected by Saturday morning.) While we were in the parking lot, I heard one of the summit guides talking to someone at Camp Muir. They had 40mph winds, zero visibilit8y, and extreme avalanche danger up there. Everyone was snowed in. Yikes! We knew we probably wouldn't be able to get all the way to the camp but decided to go up as far as we could.

Mike led the way and we started plowing our way up the trail with Mike being nice enough to break a trail through all the fresh snow. I made it less than a quarter of a mile, vomited, and felt like I was going to pass out. WHAT?! It was one of the most embarrassing points of my life, but thankfully Mike was very nice about it even though I'm sure he wondered what he had gotten himself into. It took about 20 minutes for the feeling to pass. My only guess is that the combination of ascending 5000 feet in the car and then going at 100% full steam ahead a few minutes later was just too much change all at once. I should have done some laps around the car or something.

Mike offered to show me how to assess avalanche danger to give me some more time to recover. We headed off the main trail, found a suitable spot and started digging. Basically you are digging a deep pit to look for the different layers of snow and see if there are any large variances that could sheer off. The snowpack looked pretty good so there wasn't much danger down there. I was amazed that there was still 6-10 feet of snow in most places.

After that, I decided I was ready to push on, and from there on, things went much better. Don't get me wrong, I wasn't able to keep up with Mike, but I was able to set a steady slow pace. Actually it was probably about half the speed that he was going which was still embarrassing, but at least I was moving uphill again.

When we reached 6150' feet, we stopped to eat some food. We had been on the hill for a couple hours now and it was time for a break. By this point the weather was getting really nasty so Mike and I dug a snow pit, sat down inside and at our lunch. As we sat there, one of the guided summit groups came back down past us. They had made it up to Panorama point at 6900 feet and decided it was too bad to continue. After finishing our lunch, we decided that we should probably head back as well. While I readily admit that I would not have made it to Camp Muir at that pace, I would have liked to keep going at least a bit further. Unfortunately it just wasn't safe to keep going. The ski down was going to be very difficult because we couldn't see much ahead of us.

In retrospect, we could have picked a better route down, but it was still incredible to be skiing down huge open valleys with at least 10 inches of fresh snow. Those fat skis were incredibly fun and gave me a lot more flotation than I'm used to. We ended up being about a mile west and a little lower than the trailhead so that meant it was time to put the skins back on and continue the hike.

When we got back to the trailhead at Paradise, we headed into the lodge to change into some dry clothes. Komo4 news was there with their video cameras interviewing people. You can see the news video and read the accompanying story on the Komo4 news site.

All in all it was an incredible day. I've spent many ski days in conditions like that before, but it was a shock every time I remembered the date was June 6. I can't thank Mike enough for answer all the questions I had about the whole process, for breaking trail the entire trip, for putting up with my crazy sickness at the beginning, and for waiting for me to catch up the whole trip.

The whole event was an order of magnitude harder than I had expected. I knew it would be a challenge, but I considered myself in fairly decent shape. Wrong. Carrying a 30 pound pack and tying 5 pound weights to your feet while climbing up a 20% slope was an incredible challenge. We ended up hiking over 3 miles and 1200 vertical feet throughout the day which isn't too shabby.

I do want to try it again, but I have a lot more training to do. Hopefully Mike will be willing to take me up again, but next time I'll probably choose a smaller hill to tackle and I'll train heavily before we go. I'm considering buying some leg weights and wearing those on our weekend hikes since those don't usually stress me out too much. I'm also considering attempting to make it to Camp Muir later in the year when most of the snow has melted. The last two miles will still be on a snowfield, but we shouldn't be running into a blizzard! This trip put a damper on my thoughts of summiting Rainier next year. I'll have to see how the second attempt at Muir goes later this year.

I didn't take many photos since I spent most of the day trying to keep up with Mike. Thanks to Mike for sending over some of his pictures. You can find them in the photo gallery in Skiing > Paradise. The pictures didn't come out great but it's due to the heavy snow that fell all day!