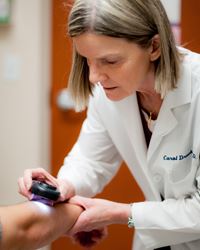 I wrote about having a chunk of skin removed back in January, but I feel the need to send out another warning message. Since that time I’ve had 6 more areas sent in for testing and one of them was bad enough that I had to get it cut out. That means I’ve now got two big ugly scars. You can laugh at me when I stop to put on my sunscreen before stepping outside, but I’m officially done with the sun. I guess Seattle is a good place for this type of behavior in the winter but in the summer, it’s one of the driest and sunniest places in the country. And don’t think that you’re safe just because it’s cloudy. Clouds still let UV through and unless they are super thick, you still need protection.

Please also consider a trip to the dermatologist to get checked. Best case is that he says you have no concerning areas and you walk out the door 15 minutes later with all worry removed. Worst case is that you have to get some treatment, but isn’t it better to catch it as early as possible? If you have a problem, it’s not going to disappear if you ignore it.

If you’re anything like me, none of this will actually convince you to go. I’ve had many friends tell me the exact same thing I wrote above and the only thing that got me to make an appointment was Tyla basically making it happen. I’m glad she did! Now I’m on a regular checkup schedule.