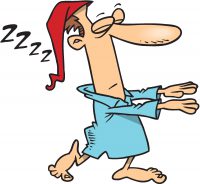 I’m a sleepwalker. I don’t remember when it started, but I haven’t grown out of it yet. Over the years, it has created quite a few interesting stories. Most of the time it just results in my pillow and/or sheets ending in a weird place or me walking around the room mumbling, but there were a couple times that it was quite a bit more involved:

The first one happened freshman year of college. I was at dinner with a bunch of guys from the floor and one of them said, “Hey Ben, thanks for yelling at Sarah last night.” I don’t remember if her name was really Sarah, but we’ll call her that for this story. It was the girlfriend of a guy on the floor and she was a VERY loud talker. My roommate started laughing when I looked confused and said, “Huh?” “You don’t remember?” My roommate filled in the missing details. Apparently the escapade had started with me getting out of bed in the middle of the night. That’s no small feat. We had loft beds. The only way to get up was to do a pull up on the cross bar and hoist yourself up. Getting down was the reverse: grab the cross bar and swing down to the ground. So I swung down in my sleep, unlocked the door, stuck my head out in the hall way and yelled, “BE QUIET! IT’S QUIET HOURS!” Then I walked back in the room, pulled myself up to bed and went back to sleep (except I was sleeping the whole time so I don’t know what you call it.)

The second one that sticks out was also in college. We were on a ski trip in Michigan. It was a big group but I only knew one or two of the guys there. We were all sleeping on the floor of somebody’s house. Apparently in the middle of the night, I got up, took my blanket over to the window, covered it up and yelled about blocking the aliens from coming in the window. You can imagine the ribbing I took from doing that in a room full of a dozen guys. The aliens through the window bit was a popular one for me. I did it in a hotel room with my family one time too.

I still haven’t figured out what triggers it. Being in unfamiliar locations can do it sometimes but not always. Lately it’s usually just talking in my sleep or thinking there is a spider in the bed, but the other morning I did wake up to find my pillow in the bathtub.

It’s kind of fun because I never know what I’ll find when I wake up.