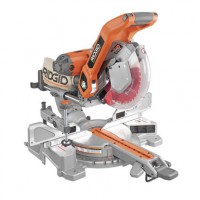 Back in November of 2006, I got my first miter saw. DougS found it at a garage sale for me. It was a 10″ Delta and it served me very well, especially considering that I only paid a few bucks for it. Aside from the fact that I needed to sharpen the blade, the only thing that really bugged me about it was the small size. I couldn’t cut through a 4×4 or a 2×8. I use 2×8’s a lot in my projects so that means making a cut, flipping it over, cutting again, and then going over to the table saw with the cross cut sled to get a clean cut. That’s three cuts where I should have one. After months of hemming and hawing, I finally pulled the trigger on a new saw: the Ridgid 10″ sliding double bevel miter saw.

My search originally started with 12″ sliding saws and for a long time, I was saving up for the DeWalt. More recently, I gave the 12″ Ridgid a serious look and was very impressed, especially considering that it was $200 less. The drawback was the size. 12″ sliding miter saws are huge and the Ridgid was significantly bigger than the DeWalt.

Looking around at various reviews, lots of wood magazines targeted at the amateur and semi-pro woodworker did 10″ sliding miter saw reviews. Why were 12″ reviews so hard to find? I ran across one article which talked about the advantages of the 10″: lighter, smaller size, and the blades are a little cheaper. And it turns out that unless you’re doing big crown molding, you probably won’t care too much about the difference in capacity. For example, when cutting at a 90 degree angle, both the 10″ and 12″ can cut 4x4s and 2x12s. At a 45 degree miter cut, the 12″ can cut a little more (2×10 vs 2×8), but that’s about the only major difference in the cutting specs. The smaller size seemed like a positive tradeoff.

I would have jumped on the 10″ at that point, especially since it won a lot of those woodworking magazine shootouts, but it was exactly the same price as the 12″. Huh!? It took me a while to weed through the specs but I finally figured out that the 10″ has a few extra features compared to the 12″. There is a laser system that people say is actually somewhat useful, an LED light that illuminates your cutting area, and most importantly for me, a soft start system. On my old saw, I’d hit the button to turn on the blade and the instant 100% power surge would often jerk the saw around a bit and the wood would move. The soft start system spins up the blade a bit more slowly so it’s a very smooth operation.

I haven’t done a lot of serious work with this yet, but so far I’m in heaven. I was tempted to wait for this saw to go on sale (it was a Black Friday deal in the past), but eventually I decided that I wanted to be done researching and I wanted to start using it. Now that I have it, I wish I had bought it a long time ago!