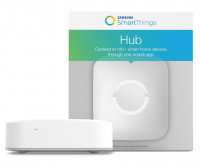 I’ve dabbled in the past with a few smart home devices like some Wemo light switches and the ecobee thermostat. One of the problems with home automation is that lots of different manufacturers are making cool devices, but they don’t all work together. There are some companies out there trying to bridge the gaps and one of them is Samsung with their SmartThings hub.

I’ve had that hub on my CamelCamelCamel price watch list for a while and one day I got a notice that it was half price so I jumped on it.

The device sits in your house and abstracts away some of the differences between the various devices. When you go through the hub, you get simplified functionality, but it’s consistent. For example, if it’s a light switch, the hub knows it can turn it off and on but it doesn’t know how to get your specific light switch hooked up to WiFi. You can kind of think of it like a universal remote.

The default setup is already useful. There are pre-loaded apps and routines to let you do things like “when you see motion on this device, turn this other device on”. That’s good but of course I wanted to dig in more and one of the reasons I picked this device is because they have a pretty good developer API.

You develop apps for the hub through a web interface in a language called Groovy. I wrote an app that logs events from my house (light switches on and off, etc) and another app that turns lights on and off in relation to sunrise/sunset with some randomness built in. It took me a while to figure out the available commands and learn the Groovy language, but it’s quite the interesting toolset once you get the hang of it.

My favorite use case right now uses the fact that our hub recognizes our Android phones as location sensors. So when Tyla and I are both out of the house, our thermostat automatically turns down a few degrees and when we get close to the house, it turns the thermostat back up. I think that one is actually going to save us money because we regularly forget to do that ourselves.

If you like to tinker with home automation, I recommend the hub. If you’re just a user who’s not going to write code, it’s probably worthwhile too, but honestly, if you’re not willing to tinker with your setup, then home automation probably isn’t your thing yet. We’re getting a lot closer, but the technology still has a way to go.