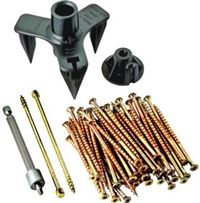 The room we picked for the nursery seemed perfect except that the floor had a HUGE squeak in it. It was so loud that Tyla walked in there one night and the squeak woke me out of a deep sleep. I want our baby to be able to sleep through anything, but that squeak might have been asking too much.

I decided to try the Squeak No More Kit. It’s a nifty solution (video demo), and $20 was worth a shot. I found all the floor joists, used twine to mark them all, and then added every screw that the kit came with. There was no difference. D’oh! Note that even though it didn’t work for me, I do still recommend it. I read tons of reviews that said it helped and read some reputable magazine articles about it.

After thinking a bit more and listening more carefully to the squeak, it sounded like it was always emanating from the same point and that point was at the base of the wall between the nursery and the bathroom. I took off the baseboard in the bathroom (making a mess of the paint which the previous owners had overlapped onto the baseboard… ugh) and drilled some 4” screws down through the drywall, through the bottom of the wall, and into the subfloor. Or at least that’s where I’m guessing it went. After just one screw I could already hear a difference. After 10 of them the squeak is almost completely gone!

This was one of those annoyances that has been on the back of my mind for quite a while so it’s awesome to have it fixed without calling in any outside help. Something tells me that won’t be the last loud noise I hear from the nursery in the middle of the night…